“When I think back on all the crap I learned in high school it’s a wonder I can think at all.”

When I was in High School, there were all kinds of rules about what you were supposed to like and not like.  Dudes talked all kinds of smack.  Very little of it had anything to do with music.  …”Ten thousand whispering and nobody listening” as Bob Dylan wrote and I always quote.  Guys argued over who was the fastest guitarist ever, who was better than whoever else, who took what drugs, etc.   Camps were formed around what style of music you were into.  There was usually a uniform of clothing that went with the music you listened to.  People dismissed entire genres of music.  “I hate Metal.  I hate Disco.  I hate Country, etc…”  I found the whole thing silly.

Just listening to music had always been perfectly gratifying to me without all of the classifications and quantifications people around me tried to apply to it all the time.  Genre didn’t exist when I just closed my eyes and listened.  If something sounded good to my ears, if something felt good, it spoke for itself.  I’ll never forget lying awake in bed in the middle of the night in a hotel room in Lake Placid, NY, listening to old big band swing records on a public radio program I had stumbled across when I was about 13.  I didn’t know what the hell I was listening to, but it sure sounded good to me.  Thank god it was so late and so far from home that no classmates could find me and start trying to explain away my joy.  I can just hear some dude’s older brother…

“No man.  This is old fogey stuff.  This stuff sucks.  Al Dimeola is the fastest, most accurate guitar player ever.”

I had been burned before, heeding that kind of advice.  I had gone and gotten some super-fast shredding electric guitar guy’s record and sat with it for a while.  … “So this is the best music ever, huh?” I had thought to myself, “I guess it’s even better than it sounds”.

So much of  what I loved about the music that I loved was not flashy or measurable by any grading or number.  My favorite drumming might not have been the fastest or most complicated drumming.   I just loved the way a drummer played with the other musicians on a song.  I loved a horn arrangement, tucked smoothly under a vocalist, lending excitement and swing.  I loved the sound of the reeds in a singer’s voice or a rhythm guitar accentuating the hit of snare drum.  I loved the way the words to a song danced along the notes of the melody in rhythm.   I loved a hi hat cymbal opening and closing.  I loved a bass and a kick drum landing together like they were part of the same instrument.

Over the past decade and change, millions of people have tuned into shows like “American Idol” and “The Voice”.  On those shows, winners are likely to bring down the house with some crazy feat of vocal acrobatics.  When it’s all over, one person -always a lone front person- wins the great prize and is then the “Idol” of the masses.  I guess it’s not sexy to have a game show about who can listen the best.   …Too bad, that.  Most people are not busting down the dressing room doors to meet the guy who played a simple bass part really well and I doubt “America’s Most Cooperative Section” would be a highly rated TV show.  …Our loss. 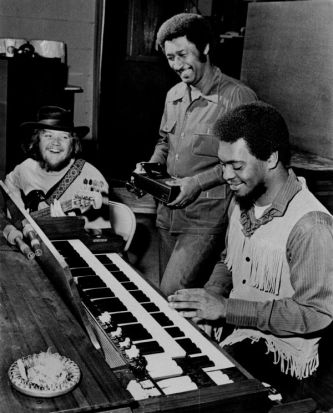 Enough talk.  Let’s just listen to some records and let them do the talking.

This entry was posted in Uncategorized. Bookmark the permalink.