Outside Bowie’s former home in Berlin

Last week I wrote a long post, trying to name my greatest songwriting influences.  I didn’t write about David Bowie.  Bowie’s name appeared in my post, but only on a very long list, among many of the other pop, rock and soul artists I listened to and watched on TV in my youth.  I had always loved David Bowie’s work and listened to his records “for hours and hours and hours” as I said in my blog, but I didn’t really feel that it was realistic to list him as an “influence” of my own.

Like so many others, this week I am forced to face just how big a loss to the world of music, art and popular culture the loss of David Bowie will be.  And when I examine my own relationship to Bowie’s music, his films and his other many public works of art, I realize just how huge a presence he was in my own life and creative development. 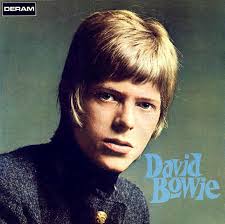 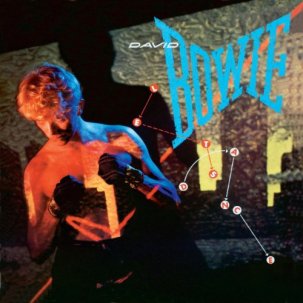 I wasn’t alive yet when Bowie emerged on the London music scene in the 1960’s.  I was born a year after his first major wave of pop stardom hit the States.  I missed out on the Ziggy Stardust years as they were happening.  My earliest memories  of David Bowie begin when I was about 10 years old.  “Modern Love” and “Let’s Dance” were mega hits of the early 80’s.  Bowie was a regular presence on the ever-exciting new MTV.

My older brother had an lp copy of the Changes One compilation.  That’s where I first heard Bowie’s classic 70’s anthems.   We wore that record out at our house.  Those songs were immediately enjoyable, and the drama of the stories they told was striking and totally engaging.  The lyrics were always both poetic and theatrical.  I loved getting lost in the fantastic voyage of that record.  There’s nothing quite like the first time you go to space with Major Tom or bob your head to the righteously over-driven electric guitar of “Suffragette City”.  That’s where it really started for me with Bowie,  as it did with millions of people. 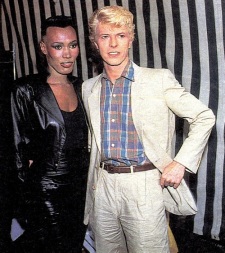 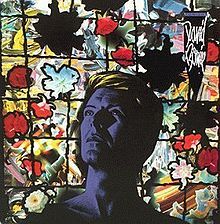 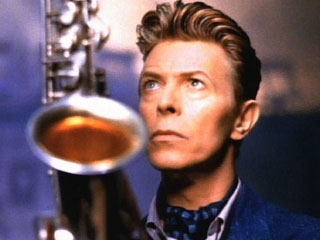 Throughout my childhood the 80’s, Bowie was seemingly everywhere in pop culture.  You didn’t have to wait long and he’d pop up again. He never looked the same but he always looked striking and he was always appearing at the center of another piece of very edgy yet very popular art.  Bowie always seemed to choose his words exquisitely in interviews while being totally candid and genuine.  I stayed up late to watch the unedited version of the “China Girl” video and Bowie’s short film “Jazzin’ for Blue Jean” on cable.  I walked around with Bowie choruses and hooks and images from his mini-movies in my head .  In every video, live clip and TV appearance, he always seemed to be practically cracking up with the great time he was having, though the subject matter of his songs was never the “God awful small affair”* you’d find in much of the top 40 pop of the time.  When I was a 5th grader, I bought the single “Do They Know it’s Christmas?”  released by Band-Aid, a collective of all the biggest UK pop stars.  On the b-side of the single, there was a re-mix of the song, with greetings from all of the stars involved in the project.   Bowie’s was the last and weightiest greeting.  After everyone else had said “Hello” or “Happy Christmas” his voice came on.  I remember his words by heart.

however small, to help them live.

Have a peaceful New Year

The girls I liked best in high school talked about David Bowie and had his picture on their walls or in their notebooks.  To them, Bowie meant fashion, confidence, intelligence, originality, sexiness, romance, modern art and drama.  For suburban high school boys in the Reagan 80’s, liking Bowie meant something a little different.  The androgyny projected in a good deal of Bowie’s public personae was still seen as pretty scary stuff by the much of the straight, meat-headed mainstream culture of my New York suburb.  Thank God we had the big, bad city close by. We couldn’t help but get a smattering of open-mindedness here and there. 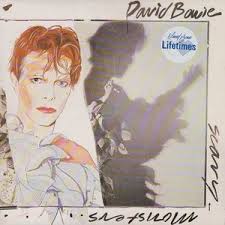 David Bowie’s music was far too compelling for my friends and I turn away from once we heard it, however strange and challenging his image might have been to the norms of our little world.  The local record store had all of Bowie’s 70’s and 80’s records. My friend Tom Pardo bought a bunch of the Ziggy Albums.  We’d sit in his room and listen to Aladdin Sane, Diamond Dogs and The Rise and Fall of Ziggy Stardust and the Spiders from Mars and talk about how crazy Bowie looked in the pictures.  Was he …gay …!?!?  Was he from outer space…?   We found VHS copies of The Man Who Fell to Earth and Merry Christmas Mr. Lawrence and watched them at sleepovers.  Who the hell was this guy?  …He was cooler than the whole planet.

By the time I got to college, I was a full-on rock music fanatic and an incurable music history nerd.  The soundtrack to many of my dorm rooms and road trips included Hunky Dory and The Man Who Sold the World in heavy rotation.  Junior year, I studied abroad in South America and I found that Bowie was every bit as familiar and important to the people I met and played with down there.  As I got more into the history of rock, I learned about the Velvet Underground, Lou Reed, The Stooges, Iggy Pop.  I fell in love with their music.  These were artists who had initially been too edgy and raw to make the pop charts with their music, yet their influence on generations of other musicians and artists was enormous. There again in the history books was David Bowie, championing the cause of these guys.  He covered their material.  He produced some of their most monumental records (Reed’s album Transformer, featuring the signle “Take a Walk on the Wild Side” is perhaps the most famous example).  He integrated their raw power and outsider’s perspective into his own blistering pop music.

All The Young Dudes

Back home in the States, Bowie was and is forever remembered in rock and punk history as the one of the central figures in 70’s ‘Glam’ music.  Perhaps his most famous early 70’s records were made in what fans and writers call the ‘Glam’ period.  T. Rex’s Marc Bolan was a pioneer of the sound and a close ally and influence upon Bowie.  Producer Tony Visconti, guitarist Mick Ronson and several of the same musicians worked with both artists during that extremely fruitful period.  Platform shoes, feather boas, glitter and make-up were also heavily associated with the ‘Glam’ rockers by fans and followers.  But the ‘Glam’ look was only the outer layer for an incredibly prolific set of wonderfully conceived and produced songs and albums that endure long beyond their release in the early 70’s. 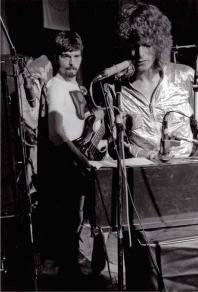 Oh No You’re Not Alone

For Bowie, what’s now remembered as Glam was just another stop along the way in a journey of music, art and theater that started long before and continued on and on.  He was always ready to move in a new direction or to team up with another artist, bringing to the table a very different set of cards.  His only common requirement for collaborators seemed to be that they were inspirationally talented and had an edge all their own. 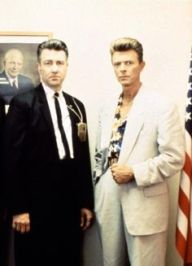 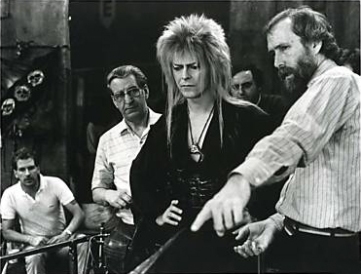 As my own personal interests branched out beyond pop music and TV, Bowie seemed to still be always right there, around every corner.  I just kept running into the guy, and everywhere I ran into his work, it was marked with excellence, eloquence and desire to tell the story of one striking outsider or another.  I  was a young theater student and there was Bowie, starring in The Elephant Man on the London stage.   I got deeper into theater and learned about expressionism and Bertolt Brecht and there again was Bowie and his powerful production of Brecht’s Baal.  …And that was just the tip of the iceberg.  Bowie worked in theater and film for 40+ years. 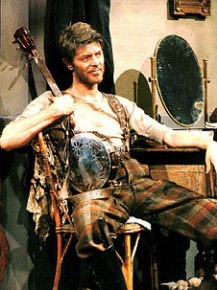 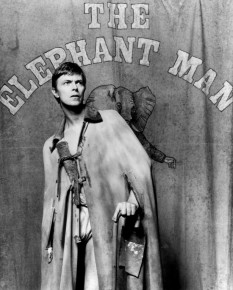 As the writer Cameron Crowe noted so aptly in a recent Obit, “he is proof that the answer to success in music [or art] is creativity, not branding.”

“He curated his life from beginning to end with no commitment to changing trends, but rather just to being authentic. If authenticity is the god you serve, it doesn’t matter if somebody crapped on your last record or not. You’re always on a journey that’s a journey for truth.” 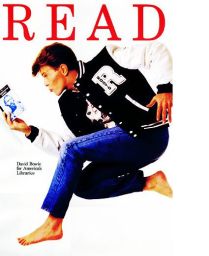 …Is There Life on …Earth?

“The Martians were there–in the canal–reflected in the water. Timothy and Michael and Robert and Mom and Dad.
The Martians stared back up at them for a long, long silent time from the rippling water….”

As I write this post today, I’ve been listening to Bowie at the Beeb, a collection pulled from a few decades of Bowie’s radio performances.  Once again, what always strikes me most of all, beyond just the exquisite quality of the songwriting  itself, is the urgency, the dedication and the poetry of the musical narrator in every line, the theatricality of it all.  In a more recent NPR interview, Bowie himself stated that when he began making music, he always had it in the back of his mind that he would write music for theater one day.  In the end, Bowie’s whole body of work is a giant, musical, theatrical epic.  Bowie’s output was total theater.  Every costume change was another expression, another creative statement.  Every weird, extreme character was another extension of the human personality.  Bowie’s glittering fiction from outer space is at it’s core an unflinching eye on all of us Earthlings and our forever alien ways.

…As I ask you to focus on

Sailors fighting in the dance hall

Take a look at the lawman

Beating up the wrong guy

He’s in the best selling show
-From “Life on Mars”

I can’t summarize the enormity of David Bowie’s cultural contribution to us all.  Forced to try, I would say it was something along the lines of “he made the world a safer place to live by constantly challenging it”.  Throughout my life and the lives of so many others, Bowie was always there, being as weird and artsy and intellectual and extreme as he wanted to be and doing it with joy, mastery, grace, bravery and benevolence.  If a few thousand people around us in our every day lives constantly said “don’t rock the boat”,  reliably one very loud, eloquent voice was always saying “the boat must forever rock”.  Let’s live David Bowie’s legacy by freeing our minds as best we can, by exploring and creating freely and with full dedication.  The star man has come to meet us and blown our minds with his “hazy, cosmic jive”.  He may have left this world, but before he left “he told us not to blow it” over and over again “cause he knows it’s all worth while”**.

*lyric from Bowie’s “Life on Mars”

Milton is a Songwriter and musician from New York.
View all posts by Milton →
This entry was posted in Uncategorized. Bookmark the permalink.