A Little Kid on the Scene

When I was about 12 my older brothers formed a punk band.  They were both in high school.  My brother Tom had been playing the guitar and flirting with various kinds of music for a while.  When he discovered punk it was love.  My brother Ben had just gotten his first drum kit.  He too loved the defiance and weirdo pride of punk.  They recruited Chris Clay, a neighborhood kid who was our fourth brother and a couple of other kids from our town and started rehearsing all the time.  Tim Hughes played rhythm guitar for the first few months and Pete Schmidt played bass.  Tom, Ben, Chris and Pete rehearsed at our house all the time for the duration of High School.  Their sound was loud and crude but they got their act together and played whenever they could.  I remember hearing them working on “Tommy Gun” by the Clash for hours.  The noise filled the whole house.  I was impressed.

Right away, Tom was very driven to write his own songs.  Ben and Chris got involved in the lyric writing too.  I remember what I believe was their first song.  It was called “Sell Out City”.  It was loud and angry and adorably topical in retrospect.  It had just a few chords and a thrash beat.  I can still hear them rehearsing it, stopping and starting.

Radio waves are filled with shit

All I hear is top forty hits

No creativity they wouldn’t dare

The end of the chorus went…

Sell out city, I don’t know what to do

Sell out city’s gonna get you too.

Tom just kept on writing songs and those dudes just kept on bashing away.  Their work ethic was inspirational.  Seeing it all first hand was great for me.  I watched all of the rehearsals.  I saw all of the songs get written and worked out.  I saw them make their own posters and stickers on our very first home computer.  Soon they recorded a demo tape.  That seemed amazingly sophisticated to me at the time.  They played their first show in our garage.  Soon after that, their set was cut short at the High School talent night for its loud, rebellious nature.  We were all outraged and heartbroken.   A few months later, a big watershed moment came when Tom announced to us all that he had booked the band a gig as the opening act at a punk club clled the Anthrax in Stamford, CT (No relation to the heavy metal band of the same name).  Tom had learned about the Anthrax through the underground youth network that was the hardcore punk scene of the 1980’s.  We were all blown away by how grown up and professional the whole thing was.  A gig in a club!  Nobody could contain the excitement.

The big gig was on a warm Friday night toward the end of the school year.  There wasn’t enough room in the car for anyone but the band members and their gear, but the club was supposedly walking distance from the Stamford train station and the trains ran fairly late.  By the second half of seventh grade, my friend Josh had become my main running buddy and I knew he’d be up for the experience.  Josh and I had been roaming around Greenwich Village a bit by that point, so we just added this to our list of amazing adventures.  Josh told a kid he knew named Scott about it and we were all in.  I think Scott might have backed out at the last minute.  We probably gave him hell about it the next day and told him that he had “snaked us out”.  I remember riding the train in the smoking car, feeling very grown up, wondering what we would find in Stamford.  I had never been to Stamford, besides to the hospital when my father was working there.  I certainly hadn’t roamed the Stamford streets at night.  It was a rough city in many parts.  I don’t know how we knew which way to go when we got there.  Maybe my brother had instructed me.  Maybe we ran into an older skateboarder kid from our town and followed him.  I really don’t remember. 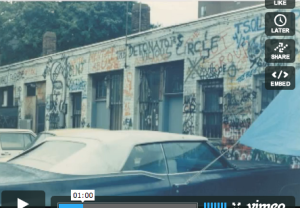 The Anthrax wasn’t in a very nice part of town.  It was an industrial area, near some housing projects.  There wasn’t much doing there by night.  There weren’t even many streetlights and the club wasn’t visible from the street.  We walked up to the parking lot of a mechanic’s shop, where we found a bunch of kids in punk clothes hanging out.  Some kids were doing skateboard tricks in the alley.  Others were smoking, spitting and cursing.  We tried to act as cool as possible, hoping no one would notice that we were twelve year olds.  In one corner of the parking lot we saw some kids come out of a door that lead down to a small basement.  The walls of the stairway were covered in band stickers, taped up fliers, duct tape and graffiti.  I could hear my brothers tuning up.  The place was dark, smoky and sweaty.  The music was amazingly loud.  We had made it!

I can’t really express how cool it felt that night to be in on the underground scene.  Though they were playing for a crowd of 20 or 40 teenagers that night, my own brothers were practically rock stars in my estimation.  They were up on a stage playing and kids I had never met from other towns were slam dancing to their music.  Josh and I jumped in the mosh pit too.  What a jolt!  In the dark basement it looked scary at first, but it wasn’t particularly violent.  Everyone was kind and cooperative.  Nobody wanted to hurt anyone.  If you fell down, someone helped you right up.  The stage and the ceilings were too low for stage diving.  It wasn’t anything really rough at all, just energetic.  But to a twelve year old kid, slam dancing and bumming smokes off dudes with Mohawks in an urban basement at 11:00pm on a Friday night was some pretty wild carrying on.  We couldn’t even stay much more than an hour because we had to make the last train home.  I remember stopping at some all night convenience store on our walk back to the train.  Some awfully seedy characters were hanging out at that store.  I bought some lemon flavored Hostess Cupcakes.  Even that was pretty wonderful as far as I was concerned.

Over the course of the next few years, my brothers played the Anthrax several times.  They also played at New York’s famed CBGB and many other places in the New York/ tri-state area.  I was in attendance at most of those shows.  Eventually I took to working the merchandise table for my brothers.  Boy, did I feel cool.  I remember palling around with Wattie, the giant-mohawk-sporting, heavily pierced lead singer of a Scottish group called The Exploited.  He drank a lot of beer and I couldn’t make out a word he said, but he sure was friendly.  The Anthrax club itself moved to a much bigger warehouse-like room in Norwalk, CT and my brothers’ band eventually became regulars there.  They even made a record for the Anthrax record label.  I tagged along to gigs up there more nights than I can remember.  We got to be pretty big fans of some of the Connecticut bands and we were always excited to go up there to see other bigger acts when they came through on tour.  Acts that would achieve international fame like Fugazi, Henry Rollins, the Bad Brains, Sonic Youth and the Lemonheads all played there.  I spent several sweat soaked nights there as a fan, stage diving and shouting along with bands, feeling incredibly alive.

There are plenty of war stories I could tell from the Anthrax days; fights, gangs, police raids, drug overdoses and drug busts made their way into the festivities.  Those type of incidents were really the exception to rule over there for me.  More than anything, I’d have to say that my feelings about that scene were very positive.  I never really considered myself a punk.  I was the kid brother of the guys in a punk band.  Nobody ever gave me or my friends a hard time there.  The Anthrax was like a haven of acceptance for so many kids in the conformity driven suburbs.  For a couple of dollars admission, underage kids could go out to a club for the whole night and be thoroughly entertained by 100% independent bands from all over the U.S. and elsewhere.  Bands toured the entire country in station wagons and slept on people’s floors, largely just for the fun of it.  Friendships were struck between kids from different towns.  Teenage aggression and self-expression had a safe, legal outlet and homemade, thoroughly un-corporate music was at the center of it all.  I’m forever thankful that my brothers were so involved in what was known as the Connecticut Hardcore scene.  I’m proud of my brothers and all of the other kids who were a part of that scene.  I’m pretty sure the likes of it did not exist before or after that time.

A book about the Anthrax was published in 2009.  Check it out: http://www.anthraxclubbook.com

My brothers’ band was called the Zombie Squad.  You can see their name in posters in the book.  There’s also a very good documentary about that era in punk music called American Hardcore.  It’s available on Netflix and other places.

Milton is a Songwriter and musician from New York.
View all posts by Milton →
This entry was posted in Uncategorized. Bookmark the permalink.

6 Responses to A Little Kid on the Scene